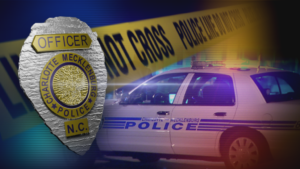 CHARLOTTE, N.C. – A suspect is dead following an officer-involved shooting in the Ballantyne area.

The department tweeted around 8:00 on Saturday night that it happened in the 10000 block of Blairbeth Street.

Police say a man forced his way into his ex-wife’s home during a fight. They say she got out of the house, but the suspect held her 13-year-old daughter at knife point.

Investigators say one officer discharged his gun, hitting the suspect, who was pronounced dead at the scene by MEDIC.

The 13-year-old was taken to the hospital with life-threatening injuries, due to multiple stab wounds from the suspect, police say.

No officers are reported injured.

An officer-Involved shooting investigation is being conducted in the 10,000 block of Blairbeth St. in the South Division. No Officers reported being injured at this time. More information will be released when available. Media staging – area at 16704 Hawfield Wy Dr.

Published On December 19, 2021
By info@charlottebusinesspages.com
Cagegories