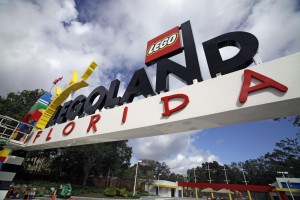 FILE – In this Tuesday, Sept. 27, 2011, file photo, a worker puts finishing touches on the entrance sign at Legoland Florida in Winter Haven, Fla. The Legoland theme park in Florida is planning an expansion next year including new rides, according to plans filed with the city nearest the attraction. The details have not been revealed, but news outlets report Legoland will add about 4.5 acres (1.8 hectares) to its resort near Winter Haven.(AP Photo/John Raoux, File)

Park officials also announced ticket prices on Tuesday. A one-day ticket will be $34.99 at the gate and $30.99 online.

An annual pass costs $79.99. The new park is also offering several combo deals for Legoland and its waterpark.

The new park will be located near the main Legoland theme park and be separately ticketed. The Peppa Pig theme park will feature rides, interactive attractions, play areas and live shows.

It’s based on the popular preschool animated television series, and families visiting the park will be able to meet Peppa and her friends.

Published On October 21, 2021
By info@charlottebusinesspages.com
Cagegories